Viola Woodward and "A Mess of Greens"

When we bought our house in more than a dozen years ago, we inherited a housekeeper who had worked for its previous owners. In a very short time, Viola Woodward did much more than keep our house clean and in good order. She became a great friend, a member of the family, a constant source of amusement and joy. On the days she came to work, the noise of the vacuum cleaner was often drowned out by the sound of laughter. Her generous spirit, her astute and witty observations on life in , her abiding good sense, made her work days more entertaining than any sitcom on TV.


To celebrate John’s 50th birthday, we decided that we were going to throw a large party. We told Viola, who also worked on the side as a bartender at private parties, that we wanted her to come as guest. But she would not hear of it. She enjoyed her star turn as an entertainer behind the bar too much to be merely among the invitees. So we set up a bar for her on the back deck, under a tent erected for the occasion. And there she became the heart and soul of the party, dispensing drinks and good humor in equal measure.

When Viola and her husband moved to a few years ago, we were devastated. We do stay in touch by phone and see her on her occasional visits to her family in .
When I had a double knee replacement in 2007, Viola came up to help John look after me during my recovery. Her company was extremely therapeutic, and she cooked some wonderful meals for me while she was here. Her specialty was “a mess of greens.”  Here is my version, inspired by her recipe:

1 lb of kale, chopped and washed

In a pot large enough to hold the pound of chopped kale, pour a tablespoon of cooking oil, and over medium heat, sauté the ham and sliced garlic until the garlic is lightly browned. Add one cup of chicken broth and the kale, salt and pepper. Reduce the heat and simmer until kale is tender (20-25 minutes. Drain, saving the “pot liquor” for a soup.  Stir in the olive oil and optional ginger. Serve. 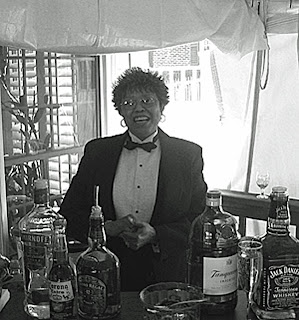 Viola presiding at the bar, dispensing drinks and good humor

Email ThisBlogThis!Share to TwitterShare to FacebookShare to Pinterest
Labels: Mess of Greens