Fusilli with Sausage and Turmeric

After a brutal summer with high temperatures, violent storms, and even an earthquake, mild autumn weather seems to have arrived in .  Yesterday was our first day in many months that could be considered “a sweater day” (a light sweater, of course).


With the coming of cooler temperatures, I’d like to write about a good cool weather dish that even looks autumnal, mostly because it makes use of turmeric, the vivid yellow spice found in curries and other Indian dishes.
Turmeric has been recommended to us by my cousin Stephen Duplantier, a brilliant cook and documentary filmmaker who was honored at the Cannes International Film Festival in 1989 for his films made in Louisiana French, including Vivre Pour Manger, about Cajun cooking. He now lives in and is the editor of Neotropica, an online magazine for American expatriates in (www.neotropica.info ). Stephen is a strong believer in food that is healthy as well as good-tasting, and he is convinced that turmeric has many benefits.
Turmeric, I’ve learned, is a proven anti-inflammatory and research is currently underway exploring its effectiveness in treating cancer, arthritis, Alzheimer’s disease, and various other disorders.  And if that’s not enough, it also repels ants.
Following Stephen’s advice, I have taken to adding turmeric to soup, chicken salad, rice and pasta, and I like the mildly pungent taste and bright color it gives these dishes.  Recently  I got a little too enthusiastic while sprinkling it in a pot of chicken broth and it turned the broth a threatening yellow of a hue that Van Gogh might have employed in a painting near the end of his troubled life. Worried, I emailed Stephen: “Can one perish from an excess of Turmeric?”    “No,” he replied, “the worst that can happen is you may start to speak English with a Hindi accent and experience an overwhelming desire to read the Bhagavad-Gita.”
Since then I have been more judicious in my use of it. The following is one of my favorite turmeric flavored dishes. Even John, generally not a big fan of pasta, has made approving noises about this one.
One of the main ingredients is Hartmann’s Weisswurst or Bratwurst, found at our local Wegmans supermarket. It is delicious, has no nitrates or nitrites, and is flavored only with spices and lemon juice. I also find at Wegmans the Better Than Bouillon soup base, which provides lots of flavor in a little jar. These are the only two specific items in this recipe that may be hard to find, but adequate substitutes should be fairly easy to locate. I believe the De Cecco pasta is available almost everywhere.
Ingredients:
About 2 tablespoons of extra virgin olive oil
4 cups of De Ceccho fusilli pasta (half plain and half spinach)
1 medium red onion, peeled and chopped
1 stalk of celery, chopped
3 or four cloves of garlic minced
1 small jalapeno pepper, seeded and minced
1 teaspoon of turmeric powder
1 pound package of Hartmann’s Weisswurst or Bratwurst cooked sausages, sliced thin
About two tablespoons of minced seasoning ham
8 ounces of sour cream
1 teaspoon of “Better than Bouillion” (the vegetable variety)
Salt and freshly ground pepper to taste
A cup of freshly grated Parmigiano
½ cup chopped parsley
Set a large pot of salted water over high heat. When it comes to a rolling boil, dump in the pasta, stirring occasionally to make sure it does not clump. If you are using the De Cecco fusilli, the cooking time is 12 minutes. I always keep a cup of ice water ready to throw into the pasta water when the timer goes off to stop the cooking immediately.
While the pasta is cooking, sauté the onion, celery, garlic, and pepper in the olive oil in a large saucepan until they are all softened.
Stir in the turmeric.
Then add the sliced sausages and the minced ham. Add the Better than Bouillon and continue to sauté and stir for a few minutes, then add the sour cream, while still stirring.
By the time the pasta is ready to drain, the sauce should be ready.
Drain the pasta in a colander and dump it into the pot with the sauce. Mix thoroughly in the pot and then divide between two bowls, Sprinkle half the Parmigiano and parsley on each one. A few turns of a black pepper mill and the pasta is ready to serve. 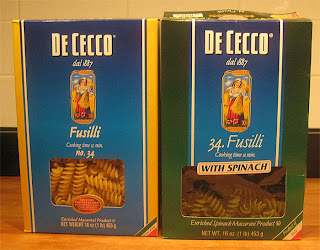 De Cecco is my preferred brand of pasta 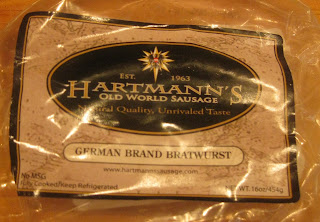 Hartmann's Bratwurst and Weisswurst have no chemical additives 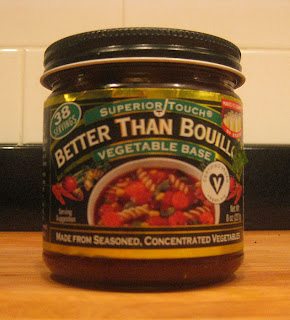 One teaspoonful of Better Than Bouillon adds a lot of flavor 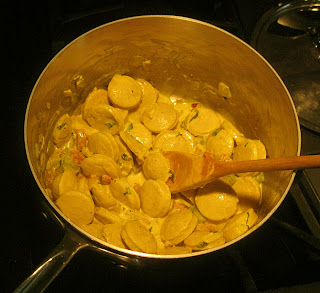 The sauce in the pot 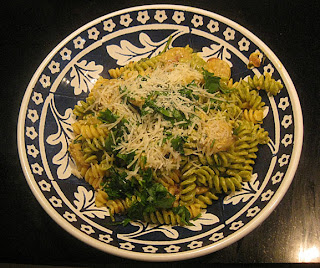