The Fleshpots of the East

in early spring, 1974. The bridge across the Bosphorus, connecting Europe to , had just been completed a few months before when my brilliant, learned, and witty friend Timothy Verdon and I spent a week there.


I first met Timothy in early 1960s when he was a precocious undergraduate from . He served as my assistant on a student ship on which I was directing an orientation program for students who were going to for the summer or for a year of study. He kept the crossing lively with his surreal sense of humor and a series of practical jokes that he might not like to be reminded of today since he is Monsignor Timothy Verdon, celebrated scholar, television personality, a Canon of the Florence Cathedral, one of whose official titles is Director of the Office of Sacred Art and Ecclesiastical Cultural Heritage for the Archdiocese of Florence. However, he is still as well known for his wit as he is for his erudition, and justly so.


That spring in almost forty years ago, we stayed in a modern and nondescript hotel near the bazaar. The window in my room opened onto a brick wall on which had been stenciled a black and white portrait of Ataturk who stared fiercely back at me each time I looked out the window.


Tim, who was either finishing or had just finished his PhD in art history at Yale, was an excellent traveling companion. He wore his learning very lightly and joyfully shared it. We visited all the important monuments of the city: Santa Sophia, The Blue Mosque, , the , and a number of obscure ones.


One day we decided to take a bus across the newly opened bridge and spend a day exploring the eastern part of the city.  We planned to wander around for a while, have lunch somewhere, and then, later in the afternoon, take a ferry back to the west.  We thought it a good idea to make inquires first at the Istanbul Tourist Office located in the Hilton Hotel. “Could you recommend,” I asked the woman behind the desk, “a good place to have lunch on the other side of the bridge?”  “Oh, no,” she gravely told me, “There are no suitable places for lunch in .”


I was somewhat taken aback by her sweeping statement, but, as I recall, we did not find a place for lunch.  We did have an interesting day poking around and looking at the architecture.  As the sun was setting, we took a crowded ferry back to .


We were very tired and very dirty when we got back to our hotel and I noticed in the lobby a flier extolling the merits of a Turkish bath that claimed to be the oldest in . The list of past customers was impressive and included Lady Mary Wortley Montagu, writer and wife of the English Ambassador at in the 18th century, and Lord Byron in the 19th. There were other famous bathers as well, but somehow those are the two who have remained in my memory.

The Cagaloglu Hammam was only a few blocks away, so we decided to give it a try.  We paid the modest fee and were given huge towels and bars of soap and escorted into the vapors. We each had an attendant who scrubbed us so clean I thought my skin was coming off.  And then we had vigorous massages. Mine was given by a pot-bellied Turk with a moustache who pummeled and pressed and rubbed vigorously until I was completely limp. As I was lying there almost comatose, suddenly a young man with long hair, wearing a leather jacket and jeans, arrived and enthusiastically introduced himself. He had, he said, recently inherited the Hammam and when he heard that there were two Americans in the bath, he was eager to meet us.  His enthusiasm for Americans, it turned out, was the result of a year spent in on an exchange program sponsored by the Experiment in International Living. It had been, he told us, the best thing that had ever happened to him. And then, revealing the dark side of educational exchange, he announced that his time in had inspired a plan to convert the ancient and venerable Cagaloglu into "a uni-sex sauna and kebab house.” I wonder if it ever happened. I certainly hope not.


Tim and I tried a number of different restaurants in , from elegant to simple, and had some tasty meals with a variety of side dishes, but somehow we always ended up with a kebab of some sort. It seemed inevitable, inescapable, so much so that after a week of it Tim remarked, “The infamous fleshpots of the East seem to be filled mostly with shish kebab. “  As a memento of our trip he gave me a small cookbook entitled Turkish Cooking, which Tim with a pen subtitled “or – “The Pocket Fleshpot.”

Turkish Cooking was written by Irfan Orga, who, I have discovered, was a well known Turkish author and former fighter pilot from an ancient Ottoman family who lived in exile in for many years. The book begins with a charming and informative preface that explores Turkish cuisine and the role it plays in Turkish life.  The recipes are clearly written and simple to follow; there are about a dozen for various kebabs. It also has this sensible advice on their preparation:


Sliced green peppers, tomatoes and onions may be served as garniture but these must be grilled on separate skewers. If they are included on the meat skewer the meat becomes tough and this is why so many shish kebab dishes served in restaurants outside the are tough and unpalatable.


The following is an adaptation of the shish kebab that I hoped to prepare last evening, but our butcher could not supply the lamb, so I will have to try it another time. It sounds straightforward and delicious. As soon as the butcher can supply me with the right kind of lamb, I plan to try it.

Combine the wine, garlic and salt to make a marinade. Marinate the lamb in the mixture for 6 to 8 hours. Dry and place on skewers, allowing a ½ inch between each cube. Brush well with the melted butter and grill for 5 or 6 minutes, turning continuously. 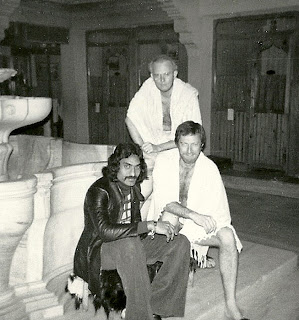 The new owner of the Cagaloglu, with Tim standing behind me. 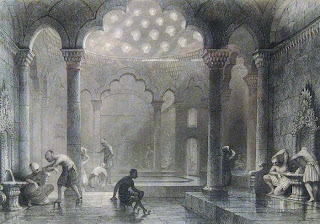 A steel engraving of the Cagaloglu Hammam made after a drawing by Thomas Allom (1804-1872), English artist and architect, showing what it must have looked like in the 1830s when Allom visited .
Posted by Joel L. Fletcher at 5:53 AM