One Easter before I was born, my father gave my sisters a pair of baby chicks that he had named, ominously for them,  Fricassee and Gumbo. According to my sister , Gumbo was, alas, soon petted to death. But Fricassee lived to be a Methuselah among chickens.  She was still alive when I arrived a few years later and I remember her well.

When I was an infant and Fricassee was still a fairly young hen, our family lived in a small frame house on , near the college in , where my father was  a professor of agriculture. It was an exceedingly quiet neighborhood and there was so little traffic that Fricassee was allowed to stay unsupervised in the front yard. According to , Fricassee soon struck up a friendship with Connie, a neighbor’s pet duck on the other side of the street. tells me that every morning Fricassee would cross the street to get her friend Connie and then accompany her back to our yard where they would spend the day clucking and quacking and scratching for bugs. At sunset, Fricassee would take Connie back to her yard, and then return home to the pen behind the house where she slept each night.

When my father became Dean of Agriculture, we moved from to the college farm.  Fricassee came with us and led a privileged life among the other barnyard fowl.  A few years later, when my father was named president of the college, we moved from the farm to the newly-constructed President’s House on the campus.  It was not a suitable place, my mother decided, for a pet chicken. She asked Mr. Landry, the grocer, if he would mind keeping Fricassee in his chicken coop. Mr. Landry said that would be fine.  We often accompanied Mother to Landry’s Grocery on and always went to the coop behind the store to say hi to Fricassee.  This continued for some time until the Saturday my mother telephoned Mr. Landry to order a chicken for our Sunday dinner.  The chicken he sent was Fricassee. Mother, fortunately, came out the back door just as Gus, our servant, was about to wring Fricassee’s neck. Mother screamed and stopped the execution.  Fricassee was not sent back to Mr. Landry. A pen was found and she lived out the rest of her life, not in the , but in the bushes of Academe in our back yard.

At least once a week, we had for lunch (our main meal) chicken fricassee made from some fowl less fortunate than Fricassee.


It was prepared by our diminutive cook, Lizzie Pillet, who was descended from a Pygmy tribe. She was tiny, but a wonderful cook who every day brought to the table delicious dishes that, I’m afraid, we probably took for granted.
I still love chicken fricassee and though I have it less often than when Lizzie prepared it, I do make it from time to time and serve it, as it was always served, over boiled long grain rice.

Here is my recipe:


2 tablespoons of olive oil
4 tablespoons of flour mixed with 1 teaspoon of salt and twelve    turns of freshly ground pepper in the large pie pan
Another 2 tablespoons of flour for browning
1 medium yellow onion, peeled and roughly chopped
2 stalks of celery, roughly chopped
1 small jalapeno pepper, seeded and minced
¼ cup of minced seasoning ham
¼ teaspoon of red curry powder
2 bay leaves
2 sprigs of fresh rosemary
½ cup of chopped parsley
1 cup of torn basil leaves
About 1 cup and a half of organic chicken stock, with more in reserve.
Dry the chicken thighs and toss in the flour mixture until well-coated.

Heat olive oil in a Dutch oven over medium-high heat.

Brown the chicken thighs in the olive oil and then set aside.

Sauté the onion, celery and jalapeno pepper in the olive oil until they are softened.

Remove vegetables, lower heat  and add two tablespoons of flour to the Dutch oven and lightly brown, being very careful not to burn the flour.

Put chicken thighs and minced ham back in the Dutch oven and add enough of the chicken stock to almost cover the chicken.

Add the remaining ingredients and put into a 350 degree oven for 45 minutes, or until tender, checking from time to time to make sure there is enough cooking liquid. 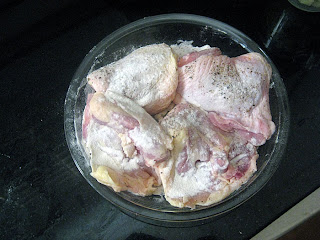 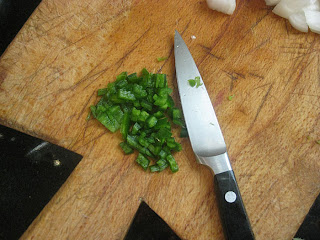 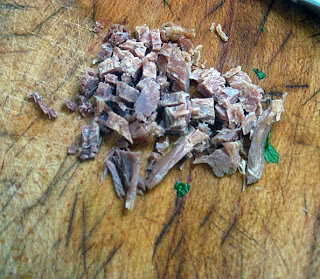 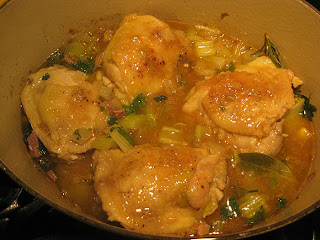 Chicken Fricassee in the Dutch oven 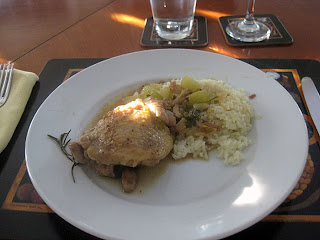