It was while running an art gallery in Louisiana that I decided to specialize in dead artists. The occasion that provoked this wise decision was a solo exhibition by a talented regional artist who painted abstractions inspired by Interstate Highway 10, and whose husband’s great wealth enabled her to play the role of a somewhat bohemian grande dame. In spite of the banal subject matter, the paintings were actually quite good. The problem was the artist, a demanding and imperious egomaniac who could not be pleased, even though we tried very hard to please her. Before her show, we did a great deal of publicity in print and on the radio, and sent out many invitations for a gala vernissage. John Bullard, the director of the New Orleans Museum of Art, who was courting the artist, not so much for her own work, but for her interesting collection of paintings by 20th century artists much better known than she, came for the weekend of the exhibition, and at one point was even helping us to wash windows while we were sprucing the place up. David Swoyer, a NOMA curator, himself a gifted painter, poet, and a brilliantly imaginative cook, was also on hand to help hang and light the show. After it was hung, and very beautifully, we thought, we invited a number of our best customers for a preview and soon had commitments on several of the works before the show began.

The gallery was in a beautiful garden setting and we had planned to have a few tasteful flower arrangements to complement the paintings, but the afternoon of the opening, a phone call from the artist, full of demands and warnings, included her instruction that there be no flowers or decorations of any kind that might distract the guests from the works of art.

The artist arrived half an hour before the opening. She was wearing an ankle-length black dress, a Paisley shawl draped over her head, and had smeared generous dabs of kohl under her eyes. She looked as if she were channeling Louise Nevelson.

The artist was not happy with the positioning of the pictures and insisted that some be re-hung and the lights re-adjusted, which we hurriedly did. For the rest of the evening, she had two facial expressions, alternating between sneer and scowl. The guests began to arrive and I introduced her to the several people who had seen and decided to purchase her work. She could not have been ruder to them. By the end of the evening, they were all having second thoughts, and eventually we sold nothing.

There was food and there was drink. I don’t recall if on this occasion we served a concoction we sometimes prepared for openings: a potent drink made with lots of vodka and a moderate amount of fruit juice that we called “Let’s-buy-another-little-picture-punch,” but the star of the evening turned out to be the delicious chicken liver pâté made and brought by David Swoyer. When the artist realized that the gathered crowd was speaking with more enthusiasm of David’s pâté than of her paintings, she became livid.

She caused a small scene before she left that evening, but it is the hysterical phone call that I received from her the next morning that I remember most vividly. During her rant, I picked up a Sotheby’s auction catalogue of 19th century paintings and drawings and began to thumb through it. It contained many lovely and interesting works, all by artists vanished and mute.

Melt 1 Tbsp butter in a medium skillet over medium heat. Add the apple. Cook, stirring often, until softened, about 5 minutes. Add the shallots and cook until the shallots and apple are tender, about 2 minutes. Transfer to a bowl and wipe out skillet with small .

Melt 1 Tbsp of the butter in the skillet over medium-high heat. Add 1/2 of the chicken livers and cook, stirring occasionally, just until are firm and slightly pink in the center when cut, about 6 minutes. Transfer to a bowl. Repeat with another Tbsp of butter and the remaining livers. Let cool completely.

Heat Calvados in a small saucepan over medium heat until warm. Carefully ignite the Calvados (preferably with a rolled taper of mediocre art). Let flame for about 20 seconds. Smother the flame. Remove from the heat.

Combine the chicken livers, apple and shallots, thyme, salt, and pepper in a food processor; pulse to blend. With the processor running, add the remaining 5 Tbsp s butter and the heavy cream. Transfer to a serving bowl, cover, and refrigerate until chilled, at least 4 hours, or overnight. 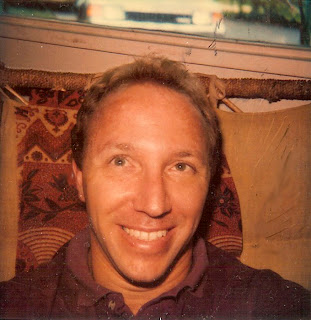 David Swoyer, pleased with the success of his pâté.
Posted by Joel L. Fletcher at 7:59 AM