Countess Claire von Oldekop-Auberjonois, recently transplanted from the south of France to Charleston, South Carolina, is the granddaughter of the celebrated Swiss Post-Impressionist painter, René Auberjonois (and a first cousin of the American actor of the same name.) Her grandfather was a close friend of Igor Stravinsky and designed the curtain, sets, and costumes for the world premiere in Lausanne in 1918 of his theater piece A Soldier’s Tale. Later, Countess Claire’s parents hid Stravinsky and his family from the Nazis in the basement of their home in the south of France while he was escaping to exile in the United States.

In the late 1960s, when I was living and working in Paris, Countess Claire was also there, working as a journalist. My office on the rue Pierre Charron was just a block away from her office, and we both took our morning coffee at the same nearby café, La Belle Ferronière.

About the time that a rich Canadian acquaintance took me to dine at the Hôtel Meurice and we sat next to Salvador Dali and his entourage, Claire went to Le Meurice to interview him. When Claire knocked at his door, Dali mistook her for a model he had hired and she ended up spending the evening in a swan tub filled with lilies reading Hegel in German to his guests. It was the beginning of a warm friendship with Dali which lasted until dementia and Dali’s wife, Gala, intervened.

Our paths must have crossed many times in Paris, but we did not meet until forty years later when she walked into our booth at the Charleston International Antiques Show and we soon became good friends.

Claire is an extraordinary cook (when she feels like it) and, while visiting us in Fredericksburg, has produced some wonderful dishes. One of our favorites is this simple and delicious Strawberry Ice with Orange Sauce:

For the strawberry ice:

Juice of one lemon

For the orange sauce:

In a large bowl, combine strawberries with sugar, crea, and lemon juice and beat until smooth. (Or you may do this in a blender.)

In a large saucepan, place the flour, yokes and grated zest. Slowly add the rest of the orange juice while stirring the mixture over a medium low heat. Continue stirring until it becomes creamy, but not sticky. Remove from heat and continue stirring while it cools. Put in fridge to chill.

In another bowl beat the egg whites as stiff as possible and put in fridge to chill.

One hour before serving take strawberry mixture out of the freezer and put it into the fridge to soften slightly.

Just before serving blend the orange mixture with the egg whites. 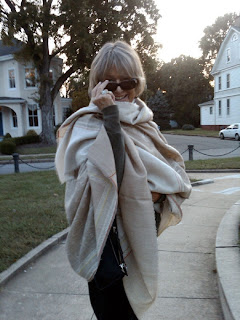 Countess Claire in Fredericksburg
Posted by Joel L. Fletcher at 3:25 AM