The Tapenade of Jean Nicolas

Our friend Jean Nicolas, a retired Parisian banker, had for many years a very enviable job. As a loan officer of a major French bank, he would take potential clients to Maxim’s five days a week and over lunch decide whether or not the bank should lend them a great deal of money. Jean was then (and is still) very trim. I once asked him how he managed to keep his figure when he was obliged to eat so often in one of the great gastronomic temples of France. “Très simple,” he said. “I always order exactly the same thing: a chop, a green salad, and a bottle of Perrier.” Jean no doubt exercised the same self-discipline when handing out loans, and had more bankers followed his example, the world’s finances probably would be in less turmoil today.

Jean was born in Nyons in Provence. He makes a tasty and very healthful tapenade using this family recipe. He has pointed out that the caper is called “tapé” or “tapeno”in Provençal, thus: “ tapenado” or “tapenade” means a sauce made with capers, even though ripe olives are the principal ingredient.

Mix the ingredients and pass through a food mill or grind in a food processor, being careful not to over-process them.

Serve on toast or crackers. 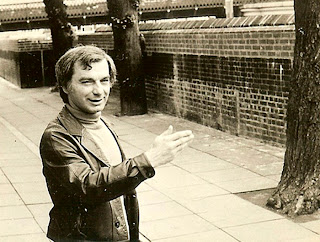 Jean Nicolas on a visit to London, 1971 circa,
Lower Mall, Hammersmith
Posted by Joel L. Fletcher at 3:51 AM