The fashionistas have taken over the Palais Royal in Paris and Raymonde Duval’s charming gallery which specialized in remarkable early 20th century French artists has been replaced by a shop selling chic and unbelievably expensive gloves. But we have many happy memories of beautiful works of art hanging on the walls of her small gallery, especially the brilliant canvases and works on paper by Augustin Hanicotte, a gifted artist who, celebrated in his lifetime, was almost forgotten after his death. Hanicotte was re-discovered and promoted by Raymonde in the 1990s. The artist, who worked both in Holland and in Collioure in the south of France, was a gifted colorist, very influenced by the Fauves, those early 20th century artists dubbed “wild beasts” because of their strong use of color and vivid imagery.

When Henri Matisse, one of the leading  fauves, who early in the 20th century helped invent the movement in Collioure, left his studio there, Hanicotte moved into it and remained for the next thirty years. The culmination of Raymonde’s efforts to bring Hanicotte’s art back into the public eye was a large retrospective of his work held in 2000 in the Musée d’Art Moderne in Collioure and in the nearby Château Royal which is pictured in so many of his works.

We had the good fortune to spend a day in Collioure seeing the exhibition with Raymonde, and when the exhibition ended, we were able to purchase about sixty of the wonderful works that had been on display. We sold them very quickly, keeping only one extraordinary watercolor and gouache for ourselves. 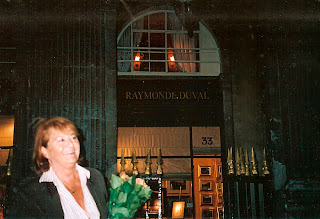 Raymonde and her elegant and now vanished gallery in the Palais Royal
Raymonde not only has a good eye for discovering art, but also a good nose for finding restaurants, and she is  a superb cook. We have had many wonderful meals with Raymonde, both in restaurants she has discovered and at her own table. Several times in Paris, and once when she visited us in Virginia, she made this succulent leg of lamb for us.

Pre-heat the oven to 400 degrees

Dry the leg of lamb, then rub in the salt and pepper, coat with the olive oil

With the sharp point of a knife, make ten holes in the lamb and stuff in the cloves of garlic.

Place lamb on a rack in a roasting pan in which you have put one cup of water and put in oven.

Every half hour put another cup of water in the roasting pan.

After 45 minutes, turn the lamb.

Turn it again after another 45 minutes.

Let cook for another ½ hour, then remove from the oven and set aside for ten minutes before serving. Serves 8 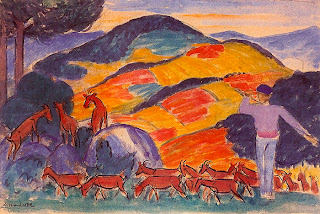