I knew two young Brazilian artists when I lived in Paris in the late 1960s, both named after famous composers: Mozart Pela and Rossini Perez. Of the two, Rossini was the more serious and productive artist. He lived in a remarkable maze of a studio that he had constructed in a dilapidated building at Place de la Bastille where the new Opéra now stands. He gave seductive, long-lasting, very laid-back parties with delicious food, wine, sambas, bossa novas, and beautiful people of several different sexes. I suspect the food was heavily laced with hashish because his guests were always extremely relaxed and happy. We sat around on comfortable sofas and low chairs, ate, drank, and sank into a mood of joyful calm.  However, Rossini was also a hard-working artist, a painter and print-maker, whose works are in important collections, including the of in . He was given a major commission by the Brazilian government and many of his pieces adorn buildings in the capital city of .

Mozart, on the other hand, was something of a slacker who seemed to live in a permanent state of near-exhaustion. A mutual friend who knew him well told me that he only produced about one painting a year and devoted most of his energy to his real passion: scouring flea markets for cheap ceramic vases from the 1940s, of which he had amassed an enormous collection.


I had first heard of him when I was living in and my close friend, Carl Selph, who was planning a vacation in , was asked by a cranky American art historian named Robert Wolf if he could possibly give Mozart a ride to . Unfortunately, this did not fit into Carl’s plan, and I heard no more about the Brazilian Mozart until I met him a few years later through a mutual friend in .
Mozart once invited me to dinner at his apartment in a public housing project (HLM) in a distant and dodgy arrondissement, and on the appointed evening, at the appointed hour, I showed up at the door of the sinister looking building at the same time as the other invited guest: Lotte Eisner, a great authority on German Expressionist Cinema, whom I knew by sight from the Paris Cinémathèque.


The first year I worked in , I lived almost opposite the Palais de Chaillot where the Cinémathèque was then located, and spent many pleasant hours there. It provided cheap and interesting entertainment, and I was somewhat starved for movies because I had been living in Florence which was then a kind of cinematic backwater and where all American movies were dubbed into Italian, often hilariously so. Among the films I had seen there were Chi Ha Paura di Virginia Woolf? and Che Fine Ha Fatto Baby Jane? And  I loved the re-release of Gone With Wind - Via Col Vento - with a scene in which Mammy had to say “Avanti, avanti, Signorina Rossella!.” instead of “Hurry, hurry Miss Scarlett!” I don’t know how she managed to get it all out, and with a southern accent to boot.
On weekends, I would frequently go to the two p.m. feature at the Cinémathèque, then the four p.m. feature, go home to have a bite of dinner, and then return for the eight p.m. feature, and when there was something really good on, stay for the ten p.m. feature. Between showings, while waiting in the lobby, I often saw the Holy Trinity of the Cinémathèque chatting together in the middle of a blue cloud of Gauloise smoke: Henri Langlois, its founder, a passionate cinephile who saved thousands and thousands of films; his portly mistress, Mary Meerson, and tiny, gnarled Lotte Eisner, absorbed in conversation.
Lotte, in addition to being a critic and historian, was also the Chief Archivist of the Cinémathèque, the one who brought order to Langlois’s creative disorder. Everyone knew these three personages and I had seen Lotte many, many times, but had never spoken to her until we found ourselves on the doorstep of Mozart Pela’s building, waiting for our host to appear.  We rang the bell and waited and waited and waited. We sat down on the stoop and began to chat. Lotte theorized that Mozart was probably in the flat, but felt too fatigued to entertain, so was ignoring the bell. Finally we gave up and decided to leave. I asked Lotte if I might treat her to a meal if we could find an eating place somewhere nearby and she said that sounded like a good idea. We made our way out of the project toward a lighted street and found an unpromising looking brasserie.  By that time we were both famished. And that is probably why the omelet I ordered seemed the best I had ever eaten. It was fluffy and light, golden brown on the outside and smooth and creamy on the inside.  We had a delightful evening. And when I accompanied Lotte back to the Métro, she invited me to come for tea at her flat in the following Sunday, an invitation I was happy to accept.
On Sunday, when I left my flat in the Marais, a bustling neighborhood with many shops, I almost stopped at a florist to buy some flowers for Lotte, but then decided that I would probably be able to find a bouquet once the Métro had taken me to . As soon as I got to her neighborhood, I realized I had made a mistake. This part of was strictly residential, there was not a shop to be found, and the streets were deserted. I felt as if I had entered a de Chirico painting as I walked  in the bright sunshine along walls with shut windows and closed doors and not a soul in sight until I noticed a young couple ahead of me, walking in the same direction. I saw them stop, look in a window, then disappear into a door. It was a fruit vendor’s shop, the only thing open on the entire street, and in the window was an attractive display of pineapples. “Good,” I thought, “I’ll buy Lotte a pineapple instead of flowers.” I stood behind the young couple and saw that they also were buying a pineapple. They paid and left with their purchase, and then I did the same.  I was about a dozen paces behind them as we bore our pineapples through the void of a silent Sunday afternoon in . Things were getting a little surreal.  They stopped and rang a bell.  As I approached I realized that they had stopped at the same address I was going to. The door buzzed and we entered together.” “Are you going to see Lotte?” the man asked in a German accent. “Yes,” I said. “I hope she‘s fond of pineapples.” Then Werner Herzog introduced himself and his wife.


The talk over tea that afternoon was, of course, all about movies, and I mostly just listened. It was 1968 or 69 and Herzog was at the beginning of his career. Later I learned what a great influence Lotte had on his filmmaking and how devoted he was to her. In 1974, when she was dangerously ill, he walked from to to show his faith that she would recover, which she did. He published a diary of the trip, On Walking in Ice  is the title of the English translation. Lotte is also the voice from the whirlwind in his 1974 masterpiece Aguirre – The Wrath of God.
Over the years, I have perfected my omelet making technique and on the mornings when I get it right, I think my omelet is probably just as good as the one I devoured with Lotte in that louche corner of Paris so many years ago.
I start with an eight-inch non-stick skillet and about a teaspoon of olive oil (which I have come to prefer to butter) over medium-high heat. I break into a bowl two organic eggs (that, courtesy of our butcher, we get from local hens),  add a splash of tap water, a large pinch of salt, a bit of freshly ground pepper, and beat vigorously with a fork. . When the eggs are thoroughly mixed and well-aerated and the oil is hot, I dump them in the skillet and turn down the heat to low. I toss in some fresh chopped chives, parsley, and tarragon from our garden, sprinkle a heaping tablespoon of shredded gruyère on top and wait until I see that the underside of the omelet has begun to turn a light golden color. Then with a very wide spatula I gently fold it over, and over once again, until it actually looks like an omelet. Another couple of minutes and it is ready to serve. 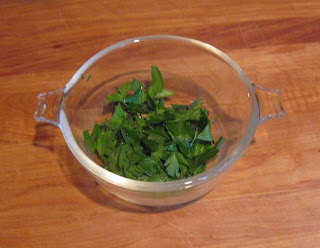 Chopped herbs from the garden 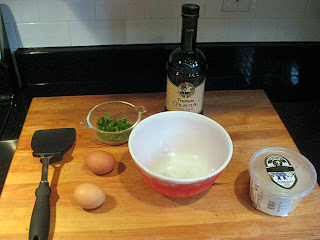 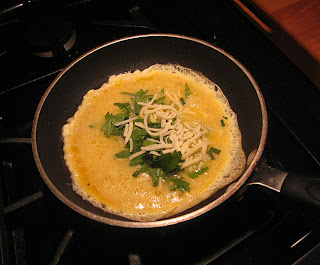 The mixture in the skillet 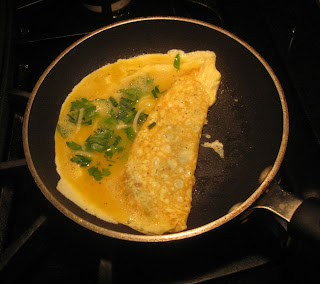 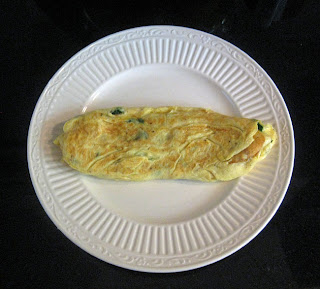 Ready to be eaten