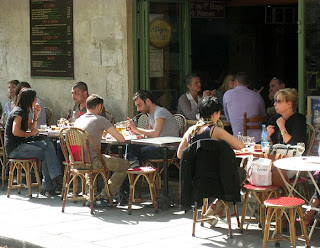 Café Le Sevigné on a sunny April afternoon
In the late 1960s, I lived for a time in the Marais, a section of Paris that had not yet become fashionable, where many buildings were shabby and rents were cheap. I had a tiny apartment with a huge casement window overlooking the garden of the Hôtel Lamoignon and the Musée Carnavalet. Almost everything I could see from my window, except for the pigeons, dated from the 17th century.

In the spring and summer, every night precisely at nine, the garden of the Hôtel Lamoignon was beautifully illuminated. Once, when I was to be traveling in Germany, I lent the apartment to some friends from England. We spent one night together in the apartment before I left on my trip. After an early dinner somewhere, we returned to the apartment. At one minute before nine, I opened the window, picked up the phone, and asked an imaginary operator to connect me with the gardener. I paused for a second, then said: “Vous-pouvez illuminer le jardin maintenant.” I put the phone down and the lights in the garden magically came on. My friends were enormously impressed… until they realized that the lights came on every night at nine.

A few blocks from my apartment, on the corner of the rue Payenne and the rue du Parc Royal, was a small hotel with a family style restaurant that served good, inexpensive food to its customers who sat together, family style, at several large round tables. One day I was having lunch there with my friends Jean and Gino and a rich and stylish Lesbian from Omaha named Marilyn (a.k.a. “Superdike”). Marilyn drove a Porsche and wore lots of leather, all of it Gucci. She also had an incredibly filthy mouth. It was the Sixties and many women were beginning to use four-letter words in public, something my rather genteel southern upbringing had not prepared me for.

Gino and Marilyn were having a discussion laced with expletives about a subject I will not mention. Across the table from us sat an elderly and elegant woman, her jowls gently lifted by a silk ribbon to which was attached a small cameo. One could see the ghost of great beauty in her features. Just as I was hoping that she did not understand English, she turned to me and said with a crisp English accent: “May I have the vinegar, please?”

“Are you English?” I asked as I handed her the vinegar, already knowing the answer. “Yes,” she said, “but I have been in Paris for a very long time. I came over to dance in the Folies Bergère just after 1900. Paris was so wonderful then, I can’t tell you how wonderful it was!

I was also a model. I modeled for Boldini and Degas…quel salaud, ce Degas! … which roughly translates: “Degas, that bastard!” …at this point I stopped worrying about her overhearing Marilyn and Gino’s obscene conversation. She had obviously heard it all.

“Life in Paris was magical,” she continued, “until, of course, the First World War came along and ruined everything. It was horrible, and I was desperate. I didn’t have a sou! I had to do something…so I went to Rio de Janeiro…I met a very nice man there who told me: ‘If you want to get back to Europe, don’t let them buy you anything but champagne’…I followed his advice and I developed quite a taste for it…eventually, I did get back to Paris, and I still love champagne…a lovely man I knew used to send me a case of it every year. That was long ago.” She sighed and looked wistful. Then brightening a bit, added: “I still have some of the drawings that Boldini did of me. Perhaps someday I’ll show them to you.”

Alas, I never saw her again. A few years later, at a huge Degas exhibition at the Met, when I came upon some of the loose drawings of dancers Degas made toward the end of his life, I wondered if she might have been one of them.

L’Hôtel du Parc Royal has disappeared and in its place is the Café Le Sevigné which describes itself as a “Bar-Brasserie-Salon de thé.” It is one of our favorite places for lunch in Paris and we have become very friendly with its charming patron, Philippe. We discovered it one hot spring afternoon when we stopped in for a cold beer after visiting the Musée Picasso, just around the corner. We happened to be in the Marais again the next day, and when we went to Le Sevigné a second time, Philippe was so pleased to see us that he insisted on buying us a round of drinks.

I told him the story of the lunch I had had in the same room, now much changed, forty years before, and he was intrigued by it. He mentions it every time we eat there, and he treats me with great respect as a relic of his bar’s historic past. He also always treats us to at least one round of free drinks.

Our usual lunch there is one of the several large salades composées on the menu. Our favorite is La Salade de la Marquise de Sevigné.

It is « composed » of the following ingredients:


About half a dozen leaves of butter lettuce

The above ingredients are arranged on a plate, dressed with a light vinaigrette and topped with a generous serving of still warm fried chicken gizzards. Washed down with a large schooner of Leffe Brun, a brown Belgian beer, and accompanied by several chunks of a good baguette, it makes a lovely lunch on a warm Parisian afternoon. 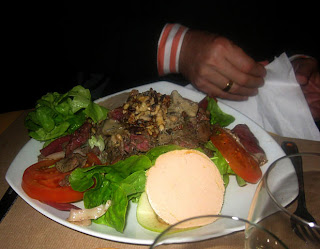 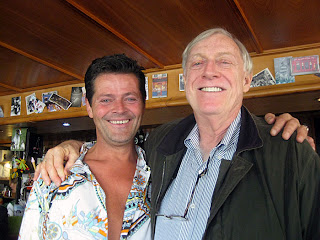 Philippe and I at Café Le Sevigné 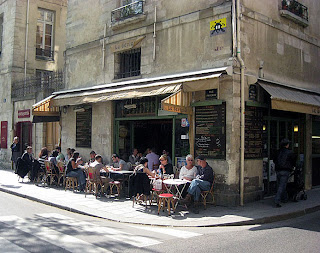 Café Le Sevigné, on the corner of the rue Payenne and the rue du Parc Royal 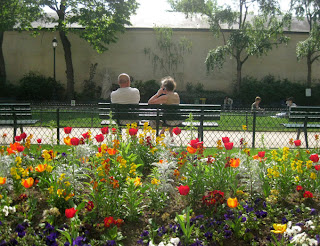