It is a curious fact that the first year I lived in Italy, my three closest American friends in Florence, none of whom knew each other well, were all from Arkansas. Why, I wondered, was everyone fleeing Arkansas? Never having been there, I could only speculate. One of the displaced Arkansans was the previously mentioned John Pozza, the second was a budding art historian named Arthur Laurence, and the third was Carl Selph, a poet, teacher and, now, somewhat late in life and rather unexpectedly, a building tycoon in Mexico.

In the 1960s, Carl and I were business partners in a quixotic venture called “The American School of Languages,” which we bought for a modest sum from an American couple who were fleeing Florence. I have described it elsewhere as consisting of “about fifty prospective students, a stack of used textbooks, several rooms of used furniture, and a short lease on a rented apartment.” In spite of these unpromising beginnings, the school survived and even thrived under our direction for a number of years during which we learned a great deal about Florence and the Florentines, many of whom were eager to learn English.

Our students came from a broad spectrum of Florentine society, from the president of Olivetti in Florence (a smart man who nevertheless was never able to grasp the difference between “Hello” and “Goodbye.”) to the woman who gave out towels at the steam bath beneath the railway station. We also expanded the school with contracts to teach English to the Italians working for NATO in La Spezia, the policemen in Viareggio (who were earnest and kind, but hopeless…I always thought that if someone wanted to follow a career of crime, Viareggio would be an excellent place to begin), and the employees of the Eli Lilly Company in nearby Sesto Fiorentino.

Once a week, I rode my motorbike up a hill to the venerable Arcetri Observatory for an hour of delightful conversation with a group of astronomers who wanted to polish their already excellent English. When I entered the large circular room that housed the observatory library, I could see all the books, in identical bindings, that had been published by the astronomers of Arcetri. The names on the spines began with Galileo and ended with the names of my students.

There is much left to write about our experiences at La Scuola Americana di Lingue, and someday I hope to get it all down, but for now I will simply mention Carl Selph’s Collected Poems, which can be ordered from Amazon.com. They are intelligent, beautiful, lyrical works, many of which deal with his years in Italy. A critic has written of them: “Selph writes both formal and free verse, always ably crafted and carefully expressed through vivid imagery and apt word-choice.” I highly recommend them.

I also recommend his late mother’s recipe for cream cheese pound cake, one of the best I have ever eaten and very easy to make.

Combine salt and flour and slowly add with eggs to the cream cheese mixture, beating well after each addition.

Fold the mixture into a greased pan and bake for 1 ½ hours in the 275 degree oven.

Remove to rack and let cool before slicing and serving. 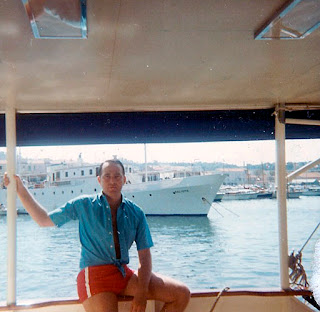 Carl Selph on the yacht of one of his rich friends in the 1960s. When he was in Florence and not traveling with rich friends, his usual mode of transportation was a much less glamorous grey Fiat sedan, which was at least one step above my Velo-Solex motorbike.
Posted by Joel L. Fletcher at 7:06 AM